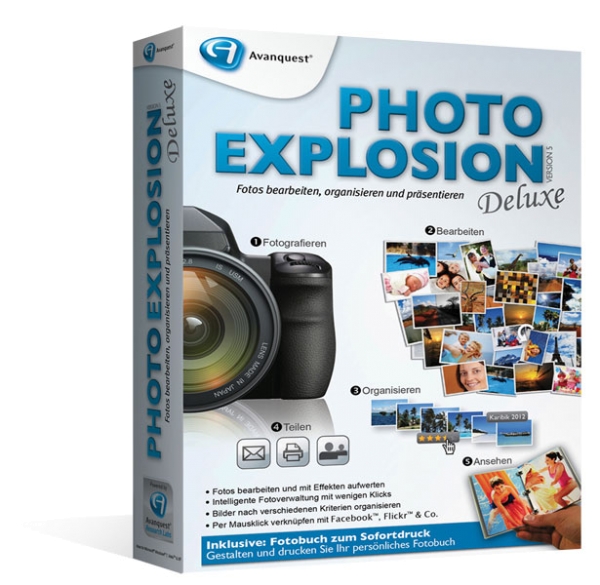 With Photo Explosion Deluxe you can edit, enhance and add a variety of effects to your photos without having to be an expert in image editing.

The intuitively designed user interface offers you a quick start and access to a wide range of professional functions. Here you can cut, retouch, enlarge, rotate, color adjust, remove red eye, or make manual corrections to images. Numerous effects and art styles such as impressionistic, watercolor, cubism, oil or puzzle make your photos look like works of art.

Thanks to Photo Explosion Deluxe you can finally keep track of your photos. Using criteria such as date, Year, and star ratings, organizing and managing photos intelligently is easy. In addition, you can tag your photos with so-called tags (keywords), which allow you to search and find pictures with specific content across albums.

In addition, the software offers a variety of graphic templates for the design of invitations & greeting cards, business cards, labels as well as templates for textile printing or decorations of protective covers for iPhone (3G, 3GS, 4), iPad, DSlite and many more.

Photo Explosion Deluxe is a real all-rounder for beginners as well as advanced users who want to achieve a fast and high quality result with few clicks.

Scope of performance of the software : 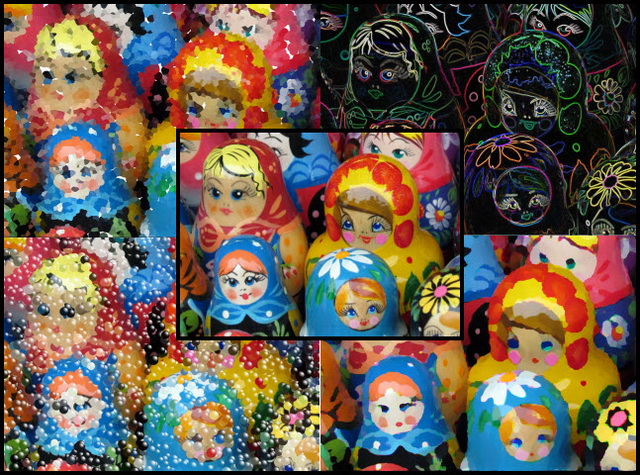 More than 80 filters offer the possibility to edit photos exactly according to your ideas.

Blur: The type of blur can be specified: Gaussian or field blur.

Color Key Alpha: This effect makes all parts of the image of a certain color transparent.

Hue: This effect adjusts the overall color value of the photo.

Directional Blur: With this effect you can specify the amount and direction of blur.

Shadow: This effect adds a shadow to the edge of the photo.

Embossed: This effect creates the impression of a carving or stone relief.

Extract brightness: This effect darkens the image with richer colors.

Darkness: This effect is similar to "glow", but darkens the photo and applies a fog to it.

Shine: This effect brightens the photo and applies a mist to it.

Growable Poisson Disk: This effect causes the photo to be blurred.

Reverse color: This effect creates a negative effect by changing all colors to their complements.

Light strips: This effect intensifies the highlights in the photo.

Magnify: This effect enlarges a part of the photo.

Monochrome: This effect discards the color information of the photo and uses only the specified color.

Distortion: This effect is similar to magnification, but additionally distorts the magnified area.

Coarsening filter: This effect turns the photo into a mosaic.

Ruffle: This effect is similar to Banded Swirl, but circular ripple waves emerge from the center.

Sepia: This effect transforms the photo into a sepia (or monochrome) print, but also allows more adjustment options.

Sharpen: This effect emphasizes the edges of the photo.

Smoothly enlarge: This effect is similar to enlargement, but enlarges a larger area of the photo.

Spiral: This effect applies a curved path to the photo.

Tone Mapping: This effect applies a vignette to the photo (the photo is faded into a frame).

Zoom Blur: This effect creates the impression of movement.

Let the photo age: This effect transforms the photo into an image from another age - a sepia print, a black and white image or a color image.

Brick structure: This effect turns the photo into a wall of bricks.

Clouds: This effect applies an overlay of blue sky and white clouds to the photo.

Colored balls: This effect is similar to mosaic, but transforms the individual colours into spheres.

Crayon: This effect makes the photo look like a drawing with crayons.

Contour: This effect turns the photo into a contour drawing.

Cubism: Any photo can be transformed into a cubist painting.

Dry: This effect diminishes the colors of the photo and coarsens the structure so that it looks like a dry painting.

Fire: This effect transforms the colours into shades of orange and yellow.

Glass: This effect simulates viewing the photo through glass tiles.

Impressionistic: This effect dissolves the photo into color dots.

Oil Painting: This effect turns the photo into an oil painting.

Puzzle: This effect breaks up the photo into different shapes and moves the individual pieces to other places.

Snow: This effect turns the photo into shades of blue.

Solarize: This effect leads to a brightening and intensification of the colours.

Vignette: This effect adds a soft border to the photo.

Watercolor: This effect dissolves the photo into large pastel-colored areas.

System requirements
How and when do I get my purchased product?
Digital products, product keys and access to the download center will be made available to you by email immediately after your purchase - unless a data medium has been ordered.
What payment options are available to me?
PayPal, Amazon Pay, Instant bank transfer, Credit card, Apple Pay, Prepayment, Purchase on invoice
What guarantees do I have at Blitzhandel24?
Blitzhandel24 is an EHI, TrustedShops and CHIP certified online brand shop. Blitzhandel24 also offers its customers permanent support, as well as support for the purchased product. If a product has not been used / redeemed, our customers can benefit from the money-back guarantee.
Further links to "Avanquest Photo Explosion 5 Deluxe"
Our concept
Pricing policy more
Close menu