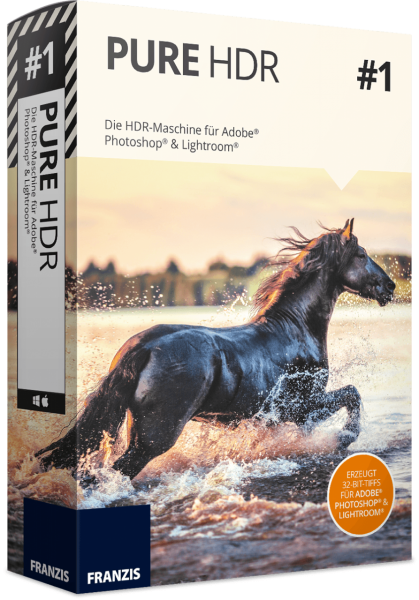 Pure HDR is the tool for all HDR professionals who want to spectacularly showcase fascinating details with the complete light and color spectrum. As a plug-in extension, Pure HDR works with the full 32-bit HDR functionality of the award-winning Franzis HDR-projects series directly in Lightroom® and Photoshop®.

All images of an exposure series are converted to a true 32-bit HDR image by one of the 7 HDR algorithms, including pixel accurate alignment and impressive ghost correction. After one click, you can continue working in the familiar environment of Lightroom® or Photoshop®. This 32-bit HDR now contains the full light information of the exposure series with incredible detail in shadows, highlights, and colors.

Pure HDR turns Lightroom and Photoshop into an HDR engine

Pure HDR is the answer for those who are excited about the undisputed advantages of HDR photography - unprecedented light spectrum, most natural colors, all details in depths and highlights - but don't want to break away from Lightroom, Photoshop and Co.

Pure HDR is a plugin extension that ports the full 32-bit HDR functionality of the award-winning Franzis HDR-projects series into Lightroom and Photoshop. In the plug-in, up to a maximum of 33 images of an exposure series are combined by one of the 7 HDR algorithms to form a true 32-bit HDR image, including pixel-perfect alignment and impressive ghost image correction. All further steps in image development can be done in Lightroom or Photoshop as usual.

Pure HDR can do more than just superimpose images. Special self-developed HDR algorithms ensure that the image information is perfectly combined and matched to the respective subject. Just as every motif requires a certain picture style, HDR pictures will only be perfect if they have been assembled with a matching HDR algorithm.

The user can influence how the individual images of the exposure series are superimposed on each other. Fine movements of objects, unintentional zooming and rotation of the camera can be taken into account. Unique: A distinction is made between motive movements, camera movements and zoom.

PURE HDR features high-precision ghost image correction that filters out moving objects or people that move within the exposure bracket, i.e. appear in different places in the individual images. A special procedure is the detail forecast: It attempts to predict movements within the exposure series and thus to remove the ghost images in a more targeted manner.

Ultra-HDR for even greater image accuracy

If Franzis does not define a new HDR standard, then who does? Since 10 years we are specialists in super-realistic HDR image development, reason enough to go one step further. Our latest development is called Ultra-HDR and the name says it all. HDR images have never been more realistic, rich in contrast and detail. This is ensured by the exclusive 64-bit HDR engine from Franzis - used in HDR programs for the first time worldwide.

An integral HDR fusion process is used, a line integral that calculates with very small sectors. This integral HDR fusion calculates in the background about 30 times more exposure series than originally available. During the calculation, more intermediate images (estimators) are generated, which are then used for the HDR image. The results are additional details, which are especially useful when taking pictures in difficult situations.
But don't worry, Pure HDR continues to work on 32-bit computing systems and even they benefit from the internal performance increase.

JPG and RAW converter, even for bracketing

Pure HDR works with all common image standards, from JPG to RAWs. The integrated RAW converter is constantly updated and even masters the development of exposure series. Any changes you make to an image in the bracketing series will be applied to the entire series if the user so wishes.

Developed pictures always have to face the comparison with the original picture that the photographer has seen with his own eyes. The human eye can perceive 100.000 differences in brightness, that is 200 times more differences in brightness - that is to say brilliance or image information - than any camera sensor in the world. This is a physical fact.

In relation to the bit depth of image files, it means

Each per color channel.

So only 32-bit HDR images can store as much image information as our eye has seen on location. This is a physical fact.

Correct is, with Photoshop, all image files can be converted into 32-bit images. But: if you simply convert an 8-bit JPG into a 32-bit image without giving the file more image information, the image will not be more brilliant because the light information is simply not there. Only exposure series and special HDR algorithms that work with floating point numbers can help here. Only special HDR programs can do this.

How and when do I get my purchased product?
Digital products, product keys and access to the download center will be made available to you by email immediately after your purchase - unless a data medium has been ordered.
What payment options are available to me?
PayPal, Amazon Pay, Instant bank transfer, Credit card, Apple Pay, Prepayment, Purchase on invoice
What guarantees do I have at Blitzhandel24?
Blitzhandel24 is an EHI, TrustedShops and CHIP certified online brand shop. Blitzhandel24 also offers its customers permanent support, as well as support for the purchased product. If a product has not been used / redeemed, our customers can benefit from the money-back guarantee.
Further links to "Franzis Pure HDR"
Our concept
Pricing policy more
Close menu