This product is currently not available.

iolo System Mechanic 2021 Professional
Computers slow down over time. This is normal, but it doesn't have to be accepted! Fight back with System Mechanic:Just one click! Includes more than 50 tools and features in one intuitive interface Makes PCs faster - and more...
€28.89 *
To the product
Description Pricing Reviews 1 Trusted Shops Reviews
Description
Your PC runs slower and slower? See all dynamometers and system errors in 2 minutes!... more
Close menu

Your PC runs slower and slower?

See all dynamometers and system errors in 2 minutes!

3. see what slows down your PC in 2 minutes

Download the trial version now. With the registered full version your PC problems can be solved. 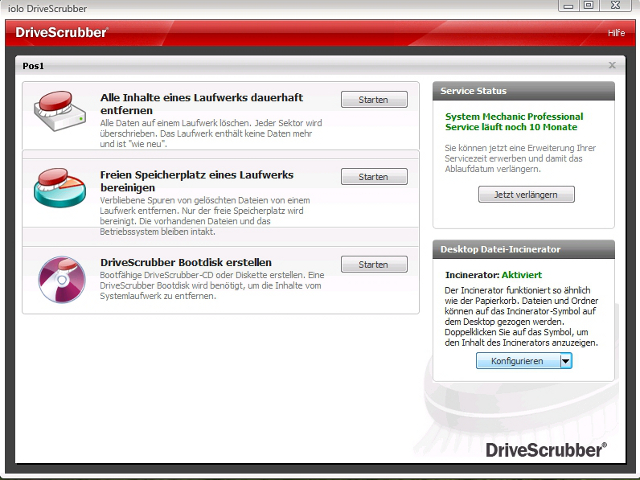 Many programs promise to improve PC performance - but only a few can keep their promise. Unlike System Mechanics, almost all other optimization programs offer only standard Windows optimization at the time those programs were developed.

System Mechanics, on the other hand, offers continuous improvement thanks to regular program updates based on the monthly Windows improvements known as patches. Because your PC is not necessarily too old just because it is getting slower and slower! Windows slows down over time - due to undeleted file fragments, registry errors and additional startup items.

System Mechanics reverses this "aging process" and often even makes new PCs faster because they are generally not configured for optimal performance. This software allows you to turn off "dynamometers" and adjust the PC settings for optimal performance. Programs start faster and work faster and more reliably. A suite such as System Mechanic helps you automate the repair and maintenance tasks that become necessary as the life of a PC increases, all with just one click.

This complete solution is worthwhile for anyone who notices that system performance is slowing down and system errors occur frequently, or for those who simply want to maintain system performance - it saves time and increases your productivity. Instead of laboriously carrying out the measures manually from time to time with individual tools, a single click is all it takes to complete all maintenance tasks.

System Mechanics is a safe and efficient all-in-one solution for repairing and optimizing your PC - and your system will run like new again!

Download the trial version now. With the registered full version for 39,99 € your PC problems can be solved.

System Mechanic 10.5 is the only complete solution that addresses all of the 9 major causes of PC performance degradation:

System Mechanic consists of the following eight individual modules, which you can of course also control individually:

DriveAccelerator: DEFRAGMENT THE HARD DISK DRIVE
A defragmentation of the hard disk ensures that parts of a file previously "chaotically" stored on the disk are stored next to each other wherever possible. This reduces the mechanical movement required to read from the hard disk - Windows can access and open files faster. This measure increases disk performance, reduces the risk of data destruction and also extends the life of drives.

Startup Optimizer: OPTIMIZE WINDOWS STARTUP
Numerous programs and services are opened when Windows starts up. While some of these programs are critical to the functioning of Windows, over time many other programs - often useless - are added that simply delay the startup process. Removing these less useful programs from the startup process is one of the most effective ways to speed up a PC. As a result, the PC starts up faster and - since fewer programs have to be loaded into the system memory - it also works more effectively and faster.

NetBooster: OPTIMIZE
INTERNET SETTINGS During the Windows installation the basic configuration is rarely optimized for the requirements of your personal Internet connection. This often leads to the fact that the maximum possible values for upload and download on the Internet are not reached. System Mechanic's NetBooster technology maximizes the data transfer rate of your Internet connection, resulting in a faster and more reliable connection.

Memory Mechanic: MEMORY DEFRAGMENT
Defragments the system memory, which can lead to a noticeable increase in performance. Defragmenting the system memory can also lead to a higher stability of the whole system, as too little memory is often the reason for a computer freeze and system crashes.

EnergyBooster: DISABLE UNUSED BACKGROUND PROGRAMS
Releases system memory and CPU resources to provide more performance for Windows. EnergyBooster uses iolo Labs tune-up definitions and custom profiles to identify background programs and services that can be safely temporarily disabled. A program switched off by EnergyBooster can of course be restarted by the user at any time.

PC Health Status Gadget:
A Sidebar mini-application for Windows 7 and Vista that provides real-time reports on the functioning, security and general health of the system. Includes a list of recent repairs and optimizations and provides quick access to frequently used tools such as Memory Mechanic and the new EnergyBooster

Tune-Up Definitions:
The tuning suite "System Mechanic" differs from the solutions of other manufacturers mainly by the signature-controlled optimizations. Just like an antivirus program, the researchers and engineers of "iolo Labs" regularly release new tuning options that are integrated into iolo System Mechanic via an online update routine. This makes System Mechanic the only program that offers its users the function of a real-time update.

System Mechanic is available as a Windows version:

How and when do I get my purchased product?
Digital products, product keys and access to the download center will be made available to you by email immediately after your purchase - unless a data medium has been ordered.
What payment options are available to me?
PayPal, Amazon Pay, Instant bank transfer, Credit card, Apple Pay, Prepayment, Purchase on invoice
What guarantees do I have at Blitzhandel24?
Blitzhandel24 is an EHI, TrustedShops and CHIP certified online brand shop. Blitzhandel24 also offers its customers permanent support, as well as support for the purchased product. If a product has not been used / redeemed, our customers can benefit from the money-back guarantee.
Further links to "iolo Your PC runs slower and slower?"
Available downloads:
Our concept
Pricing policy more
Close menu