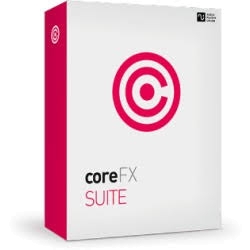 The AUDIO PLUGIN UNION's coreFX Suite is the ultimate effects bundle with all important tools for the mixing and mastering process. The suite includes nine powerful core effects for creative sound shaping, compatible with any DAW on PC and Mac: Five plug-ins for precise dynamic control, three delay effects for shaping echoes and reverb, and a rhythm effect for contemporary productions.

The coreFX 2-Point Compressor has two inflection points and therefore one more than a normal compressor. Due to the greater freedom in compressing the dynamic range, the audio signal becomes much louder, more powerful and can assert itself better against other sound sources.

A pump effect without complicated sidechain routing! With the coreFX VolumeFormer a rhythmic increase and decrease of the volume is created.

The AHR (Attack-Hold-Release) envelope shape as well as the beat can be adjusted to your taste. This creates a gate or sidechain effect, which is very popular in today's dance music scene.

The coreFX Compressor compensates for differences in volume between loud and soft signals of an audio track. By compressing the audio signals, the overall sound is perceived much more powerful and clear.

Goes to the limit: The coreFX limiter sets the output level of an audio signal to a maximum value that will not be exceeded. This allows to control ratio as well as the threshold of the maximum volume and to limit the dynamics in the final mastering process.

For particularly natural sound: The coreFX Expander works in conjunction with a compressor. The dynamic range of an audio signal is expanded, noise is suppressed and the envelope of individual signals is modified.

From subtle to special FX - from clean to dub echoes: With coreFX Delay, various vintage echo devices can be simulated in no time at all. The coreFX Delay creates a natural fading echo effect.

The jet effect for drums, guitars and synths, which leads to sound discoloration. This gives sounds an individual character and the characteristic flanging effect.

How and when do I get my purchased product?
Digital products, product keys and access to the download center will be made available to you by email immediately after your purchase - unless a data medium has been ordered.
What payment options are available to me?
PayPal, Amazon Pay, Instant bank transfer, Credit card, Apple Pay, Prepayment, Purchase on invoice
What guarantees do I have at Blitzhandel24?
Blitzhandel24 is an EHI, TrustedShops and CHIP certified online brand shop. Blitzhandel24 also offers its customers permanent support, as well as support for the purchased product. If a product has not been used / redeemed, our customers can benefit from the money-back guarantee.
Further links to "Magix coreFX Suite"
Our concept
Pricing policy more
Close menu