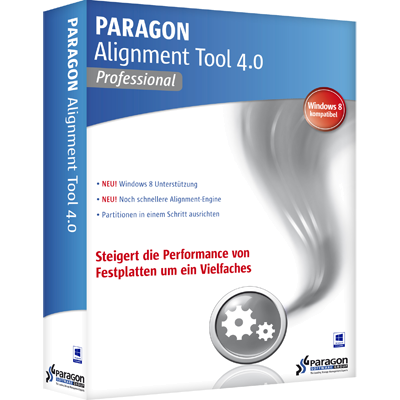 Increase the hard disk performance up to three times!

Incorrectly aligned hard disks cannot be used optimally. Paragon Alignment Tool aligns the partitions on your physical or virtual hard disk exactly to the structure of your hard disk without any risk to your data.

Try it now with the demo version, whether your partitions are aligned incorrectly!

Already in the nineties the problem of misalignment of partitions appeared, which led to performance losses when using hard disks. Initially it was administrators who wanted to get the most out of their arrays, but today it also affects all home users who use the latest developments on the hard disk market: compact, super-fast SSDs (solid state drives) or hard disks with capacities of over 2 TeraByte. The increasing spread of virtualized systems has made the problem even worse.


For the Windows installation:


For the WinPE rescue environment*

How and when do I get my purchased product?
Digital products, product keys and access to the download center will be made available to you by email immediately after your purchase - unless a data medium has been ordered.
What payment options are available to me?
PayPal, Amazon Pay, Instant bank transfer, Credit card, Apple Pay, Prepayment, Purchase on invoice
What guarantees do I have at Blitzhandel24?
Blitzhandel24 is an EHI, TrustedShops and CHIP certified online brand shop. Blitzhandel24 also offers its customers permanent support, as well as support for the purchased product. If a product has not been used / redeemed, our customers can benefit from the money-back guarantee.
Further links to "Paragon Alignment Tool 4.0 Pro"
Our concept
Pricing policy more
Close menu